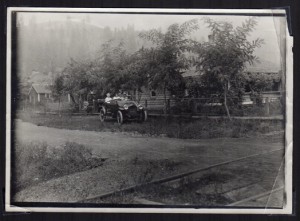 This is the Britan house in the early years. It would eventually become the “new” library. Note the railroad tracks!

It was forward-looking thinkers and librarians like Peggy Flowers, Pam McBride, and Chris Ashby who could see the coming importance of technology melding with the quest for good reading, research, and information. 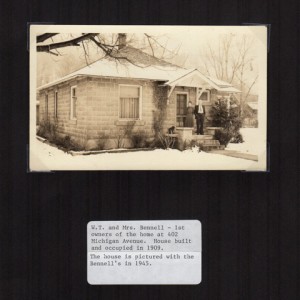 W.T. and Mrs. Bennell, pictured here in 1945, were the first owners of this home at 402 Michigan Avenue, where the Clearwater Memorial Public Library would eventually be built. The house was built and first occupied in 1909.

From gardening clubs to Arbor Day celebrations, visits by local authors and the popularity of book discussion groups, to partnering of Clearwater Valley Hospital and Clinics (CVHC) with Clearwater Memorial Public Library (CMPL) to provide access to medical technology and research via computer to the public, all have helped move this community forward. 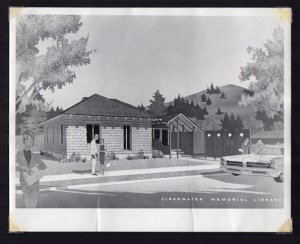 Through all of this, certain names and organizations have continued to stand out in support, such as volunteer Boards of Library Trustees, the American Association of University Women (AAUW) who organized book discussion groups and started the annual affair known as the Patchwork Bazaar, and Friends of the Library, now known as the CMPL Friends. 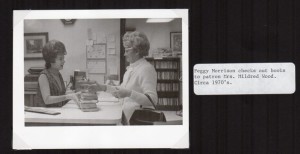 Peggy Morrison checks out books to library patron, Mrs. Mildred Woods, in the 1970’s. “Did we really wear our hair like that? Yes, we did!” says Jo Moore.

Next week we hope to spotlight the group of Jaycees (now long-disappeared) and its leaders who did so much to help make the library expansion of 1965 a reality, and to recognize those who are now working hard to enable much-needed expansion of the present library facilities.